In a corner of Mickleton’s secluded, peaceful churchyard one particular headstone stands out from all the others. 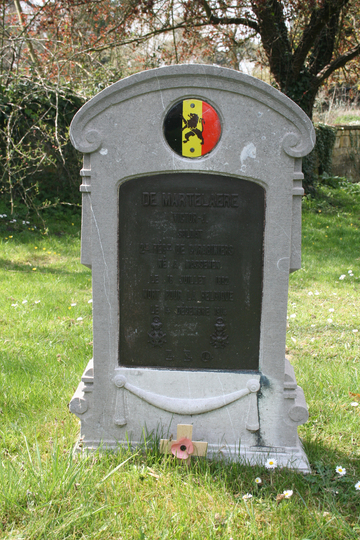 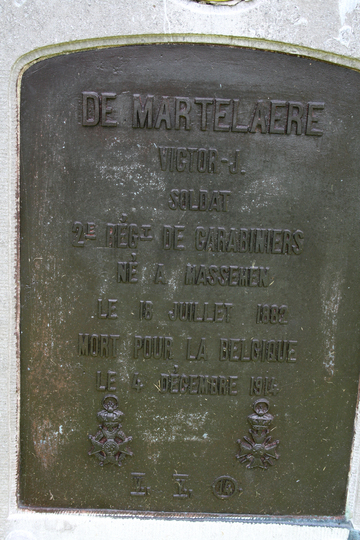 Decorated with a circular disc enamelled in vibrant stripes of his nation’s colours of black, yellow and red, surmounted by a rampant lion, it marks the last resting place of a Belgian soldier who fought for his country against the Germans in WW1 but who died a long way from his home and family. The inscription on the plaque attached to the gravestone reads:

Victor-Joseph De Martelaere, son of August, an innkeeper, and Marie De Martelaere, was born on 18th July 1882 in Massamen, near Ghent in Belgium. He was married to Angèle Verschelle but they had no children.  He was conscripted into the militia in 1902, transferred to the reserve in 1910 and then on 1st August 1914 he was mobilized into the 2nd Regiment of Carabiniers, part of the 6th Division of the Belgian Army.  On 4th August the German Army crossed the frontier into Belgium. Unable to withstand the larger, better equipped forces advancing against them, by the end of September the Belgian Army was forced back behind the Antwerp defences.  Although the exact date and place is unknown, it was around this time that Victor-Joseph received a gunshot through a lung and on 4th October he was one of many wounded soldiers and civilians evacuated from Antwerp to England.

Victor-Joseph was initially sent to a hospital in Birmingham and then, along with 16 other wounded Belgian soldiers, transferred to the Voluntary Aid Detachment [V.A.D] Hospital at Norton Hall, Mickleton.  Norton Hall is a country house situated on the outskirts of the village that at that time was owned by Samuel Bruce, an Irish business man who owned a distillery in Co. Down.  Along with many others, he had offered to lend his house to the British Government for use as a hospital.  His daughter, Miss Maye Bruce, lived in the house, supervised its conversion to a hospital and became its Commandant.  It opened for patients on 11th November 1914, the same day as Victor-Joseph and his fellow wounded countrymen arrived at Honeybourne Station. They were met from the train by Miss Bruce, members of Mickleton Ambulance Corps, Dr Johnson of Mickleton, two Belgian schoolmasters from Broadway and Father Clacs, a priest from Chipping Campden.

Victor-Joseph died on 4th December 1914 of a cerebral embolism caused by the serious wounds he had received.  He was buried with full military honours in St Lawrence’s churchyard on 7th December.  His coffin was draped with the Belgian flag, wreaths were sent by the Red Cross and others and his wounded comrades, accompanied by Miss Bruce and nurses, followed the coffin to the graveside.   Father Bilberrow, from Campden, said the Office for the Dead and Father Clacs gave the oration in French.  Two buglers, using instruments borrowed from Mickleton Boy Scouts, sounded the ‘Last Post’.  The firing party was made up of wounded British soldiers commanded by a sergeant from the Dublin Fusiliers.

Perhaps the most poignant part of this story is that in 1923 Victor-Joseph’s wife, Angèle, with the help of the Mayor of Gognies-Chaussée where she was then living, appealed to the Belgian authorities to ask if his remains could be repatriated.  She was informed that the period of time that state aid was available for cases such as this had expired.  Sadly, she was unable to pay the cost herself and so her husband’s remains still lie in our small Cotswold churchyard.  Every November he, along with the men from Mickleton who fought and died in the same war, is remembered and honoured.

Ashmore, F.  A Belgian Soldier.   Copies available in the church.