Mickleton Garage was located on the High Street, opposite Milking Pail Lane.  In the years before it was purchased by Dave Struthers, it was in the hands of Fred Smith and later his son Peter Smith.

It can be argued that Peter was perhaps not the best businessman but he was an extremely good mechanic – especially when working on his own cars.  He was well known as a sports car enthusiast and racing driver.  From the early 1960s he took part in several prestigious rallies in Austin Healey sports cars.  In addition to his rally sports he also raced in sports car events .

He was a regular at sports car race meetings up and down the country driving more Austin Healey 3000s and race-prepared Austin Healey Sprites.  He achieved considerable success.  In fact he had two Works Austin Healey 3000 cars and a close association with the famous driver John Gott, who along with Peter raced the cars.  The preparation, repairs and modifications being carried out in Mickleton Garage with the help of the then local mechanics, Tony Stowe and Philip Kinchin.

Both of these cars are still surviving in the hands of collectors. 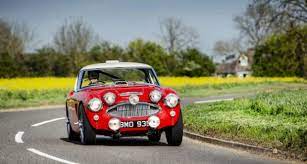 Unfortunately for Peter the car had long since left his ownership.  Even more unfortunate was the fact that John Gott crashed and died in SMO during a race at Liddon Hill in 1972.

It seems that Peter left Mickleton in the mid ’70s for pastures greener.  If anyone has further information on his post-Mickleton activities or location, please add to this page.