Mickleton is a village of just under 2000 residents situated in the North Cotswold area of Gloucestershire. 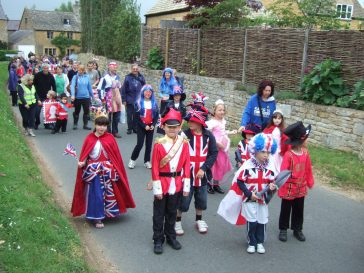 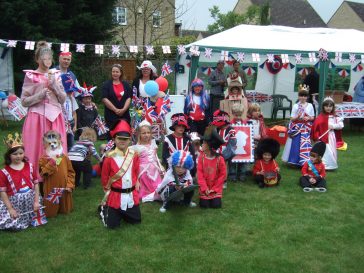 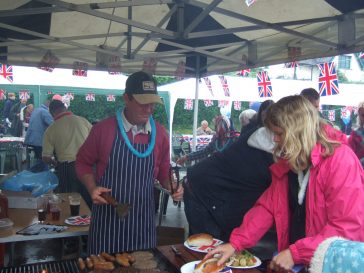 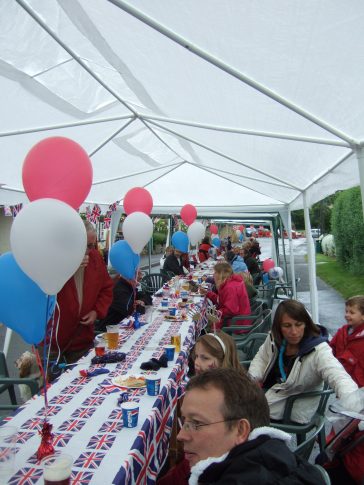 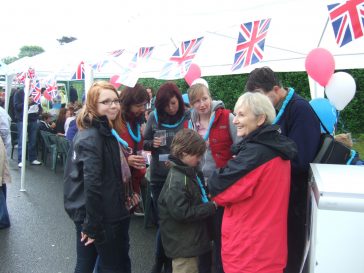 zoom
Who said it was raining?
Barry Metcalfe 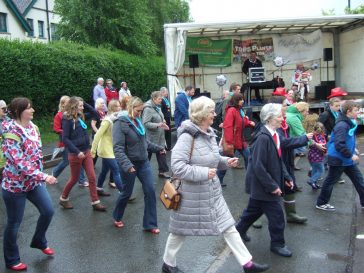 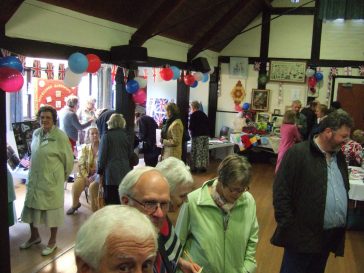 As the Jubilee year of 2012 approached, two of the village organisations, the Mickleton Society and Mickleton in Bloom, agreed that celebrations to mark the occasion should be held.  Accordingly, representatives of these organisations held an open meeting to decide on a way forward.  Residents who attended felt strongly that celebrations should be held over the entire Jubilee weekend and so, after a frenzy of fund raising, the following events were held:

The owner of one of our village pubs, the King’s Arms, agreed to let us use his extensive garden to hold events for children.  First of all, children dressed as kings and queens assembled at our other pub, the Butcher’s Arms, and walked through the village to the garden where judging was to take place. Once prizes had been awarded, contestants joined enthusiastically in traditional children’s games and races and for the adults there was the inevitable tug of war and Aunt Sally.  We were blessed with a lovely sunny afternoon which meant that the ice cream stall and barbecue did a roaring trade and there was plenty of time just to sit and relax and listen to music provided by a local band.  This proved to be a successful prelude to the rest of the weekend.

This was the day that, as a nation, we were encouraged to hold street parties.

As Her Majesty, and the country, will no doubt remember, this was one of the wettest June days for some time – not the best weather to put out tables in the street for a celebration Jubilee lunch!  Luckily, the village had some gazebos and two residents generously offered theirs so that it was possible to have some outside shelter, which, combined with the Village Hall and the Butcher’s Arms pub, meant that the 300+ people who had previously bought tickets could enjoy either a barbecue or a cold salad lunch with ham provided by our village butcher, followed by Summer Pudding, generously supplied by our local hotel, the Three Ways House, renowned nationally for its Pudding Club. Games were organised by the landlord and landlady of the Butcher’s Arms and a King and Queen of Mickleton were crowned.

A local farmer offered the use of his field for a picnic, entertainment and firework display.  Luckily, the weather was a vast improvement on that of the  previous day so there was no shortage of people to bring their tables and chairs and picnic hampers.  For those who had not brought their own food, there were vans selling burgers, doughnuts and ice cream.  Another local band provided the music and we had a Mickleton’s Got Talent competition, won by our local farrier and his son playing the bagpipes.  Once darkness fell, a beacon was lit on nearby Meon Hill, the site of an Iron Age fort, which is known locally for tales of witchcraft and murder. 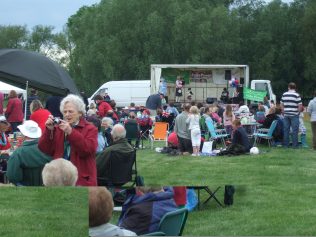 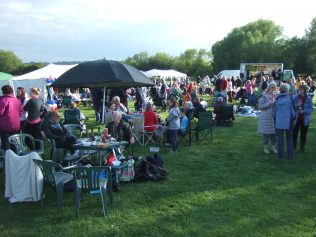 A lovely evening to relax 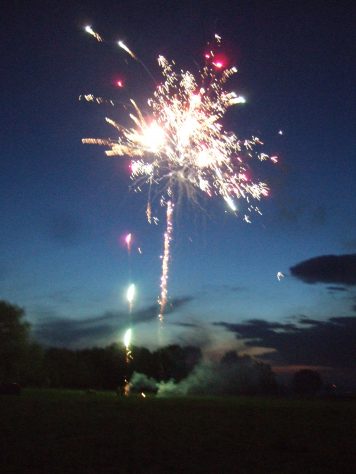 Afterwards, to round off the day, we had a stupendous firework display which was seen and enjoyed for miles around and was the talk of the village for days.

Following the excitement of the previous three days, this was a much quieter day devoted to showcasing the many aspects of life in Mickleton.  Many of the 30+ village societies staged displays in the Village Hall.  Our Anglican Church, St Lawrence, exhibited its collection of hand sewn kneelers and several extremely old Bibles were on display in the upstairs room which used to house the school for village boys.

Our Methodist Chapel housed a display of artwork and the Guides provided teas and examples of their activities in the adjoining Joseph Webb Hall.  The children at our Primary School and their parents organised games and refreshments in their excellent newly built school.

The last activity was an on foot treasure hunt based on facts about the village and devised by one of our long-standing residents.  Unfortunately, by this time the rain had returned with a vengeance so once again we got wet! 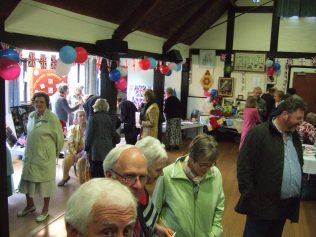 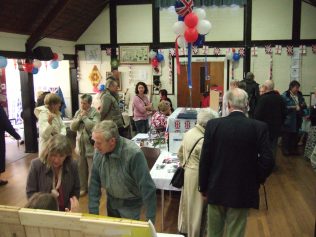 Memories of the last 60 years

Mickleton is a very busy village with a high proportion of elderly people but also with many young families.  The brilliant thing about our Jubilee celebrations was that these disparate groups who normally might not have much opportunity to mix all came together to enjoy themselves and share in the good will.

When writing this account, I am aware that a much-used word has been “local”.  All the village institutions from the Churches to the pubs to the shops to the other businesses gave generously of their time and money and, for that, those of us who helped to organise the celebrations are deeply grateful. 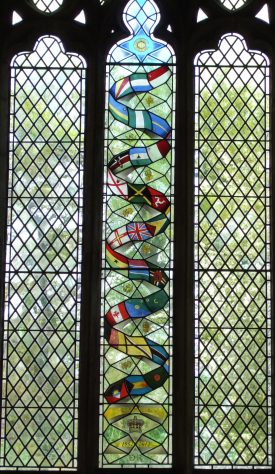 Although it was never our intention to make money from our Jubilee weekend, inevitably there was some left over after all the bills had been paid.  Another open meeting was then held to decide what to spend the money on and the majority of those attending voted in favour of contributing to the project to install a commemorative stained glass window in St Lawrence Church which has since been designed  and constructed and was consecrated by the Bishop of Tewkesbury on Sunday, May 18th 2014.