You are here: HomenextPlacesnextSt. Lawrence's Church

Many old churches have glorious stained glass windows. St Lawrence’s is no exception. In the Middle Ages, stained glass was normal in church windows – but much Mediaeval glass was smashed at the time of the Reformation or later. Most of our windows here date from the mid 19th century onwards. They were often commissioned in memory of a loved one who had died. They sometimes commemorate saints or characters important in local history. Some of them tell Bible stories. In particular, great East windows (over the high altar) often depict the Crucifixion and other related events. This visual story-telling had been particularly important in days before reading and writing was widespread: though, by the time most of our stained glass was made, illiteracy was fast becoming a thing of the past. 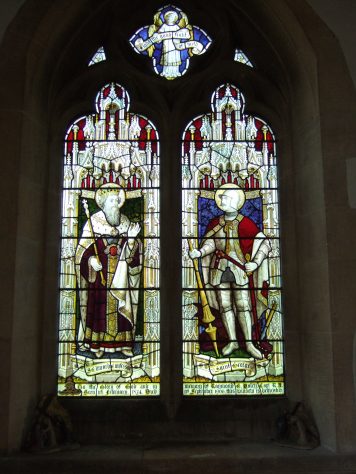 Let’s begin in the north-west corner of the church, above the Children’s Corner. Here is a very patriotic window, just about a century old. Two great heroes of Englishness are depicted: Edward the Confessor and St George. Edward was the saintly king who had ruled England for the final decades before 1066. His successor Harold reigned for just a few months. King Edward founded Westminster Abbey. George is the patron saint of England, though he never came here. He lived in Palestine in the 3rd century. Born into a Christian family, he joined the Roman Army and stayed loyal to his faith at a time of persecution. In the Middle Ages in England, King Henry III rebuilt Westminster Abbey and made St George’s Day a public holiday. His great grandson, Edward III, declared George to be our national patron saint. The window was installed in memory of another soldier, Reginald Paley, a Captain in the Royal Artillery who died at the early age of 32. 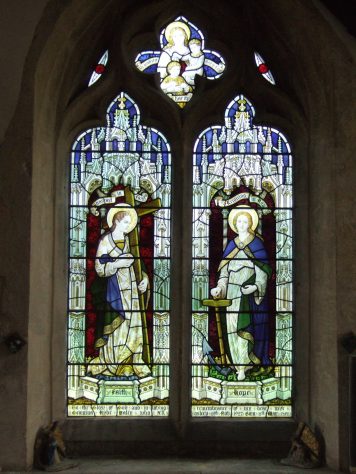 Moving to the middle window in the north aisle, we see Faith, Hope and Charity depicted as women – recalling St Paul’s words in 1 Corinthians 13. Although Faith and Hope are larger images, Charity has pride of place in the centre, at the top of the window. Installed by another member of the Paley family in memory of his wife, it is she who is seen as ‘Charity’, with her children at her side. 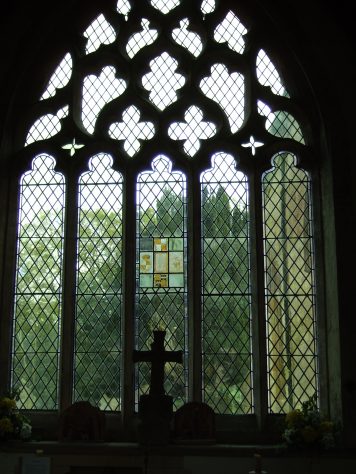 Pause now to look at the East window in the north aisle: largely clear, but with a fascinating assembly of  much older glass at the centre. Apart from coats of arms, one small panel has a fascinating Latin inscription referring to the three characters from Anglo-Saxon history depicted in a window in the chancel, to which we shall come. They are: Count ?thelm?r;  King Edgar, and Byrhtnoth ,the eolderman of Essex. This small mediaeval commemoration really stirs the imagination: was there, perhaps, an older window in the church prior to the Reformation, also showing these three, of which this light is the only remaining section? 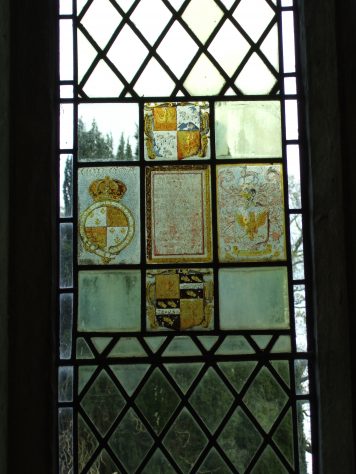 This small mediaeval commemoration really stirs the imagination: was there, perhaps, an older window in the church prior to the Reformation, also showing these three, of which this light is the only remaining section? 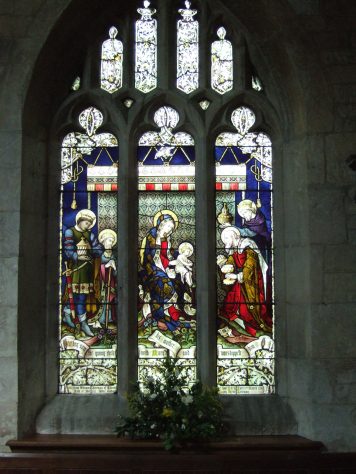 Going next into the chancel, the first window we come to on the north side depicts the Epiphany – the visit of the Wise Men to Bethlehem, bringing their gifts to the infant Jesus. The window reminds us that ‘they saw the young child and worshipped him’: and so it is a call to us, to do the same. It is in memory of William Thomas Freeman of Hidcote – like Paley, an Army captain, but in the 4th Regiment of Foot. He lived from 1840 to 1882 and the window was given by his widow Mary Webb Freeman. 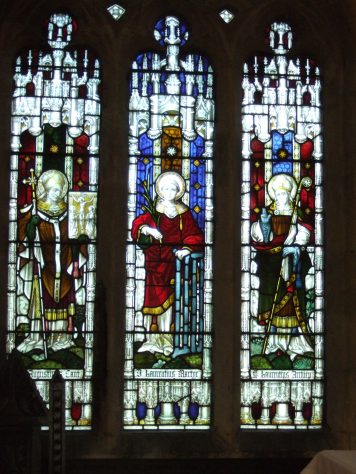 In the north east corner of the chancel are three saints: two Lawrences and an Augustine. In the centre, our St Lawrence, the Deacon of Rome who (tradition says) was called on by the authorities to hand over the church’s greatest treasures. When he took with him the poor, the hungry, the handicapped, the powers objected ‘what do you think you’re playing at?’ ‘Well, you asked for our greatest treasures: these are they!’ This was not calculated to win himself approval and in fact he was martyred, burnt on a grid-iron (his symbol). To the right is St Lawrence the second archbishop of Canterbury – and to the left, Augustine, his predecessor. 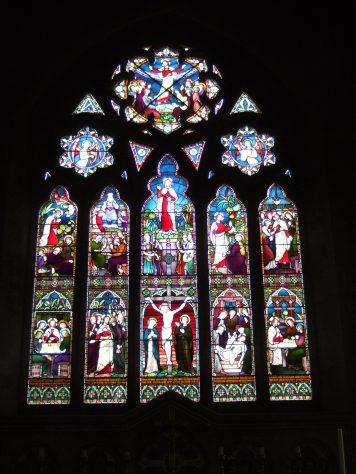 The great East window is fascinating for various reasons. It is believed to have been made by Frederick Preedy, the well-known Worcestershire architect and stained glass artist who worked all over the country, including in several cathedrals and great churches. Stained-glass enthusiasts will be aware of two ‘Preedy trails’, one around Evesham and another centring on Ledbury, where much of his work may be seen. This window seems to have been the fruit of shared sponsorship, each of the five main panels carrying a different dedication, some in Latin. Joseph Roberts of Clopton is commemorated (1834, but presumably a retrospective dedication). This was ‘given by James Fenton, armiger’ – which is the Latin term for an ‘Esquire’, the junior or assistant to a knight. Also mentioned are Ann Graves, John Graves, William Gardner of Mickleton (described as a ‘beloved father’) – and Richard Porter (described as an ‘outstanding man’). Porter had been long dead (350 years) when this window was made. Perhaps the Charity funded this commemoration?

The arrangement of subjects in the East Window is well worth noticing. At the top, we see the Ascension of Christ, below to either side the words ‘Alpha’ and ‘Omega’ – the First and the Last. Next down come angels with harps. Then a series of panels recounting the events of the Passion and Resurrection:

Left to right: Jesus in Gethsemane – The Trial before the High Priest – the Resurrection – Mary in the garden – Thomas puts his finger towards Christ’s wounds.

Bottom, left to right: The Last Supper – The traitor’s kiss – The Cross – Jesus laid in the tomb – the meal at Emmaus.

Why not take the opportunity of looking slowly and reflectively at these panels, and thinking of the incidents they represent? 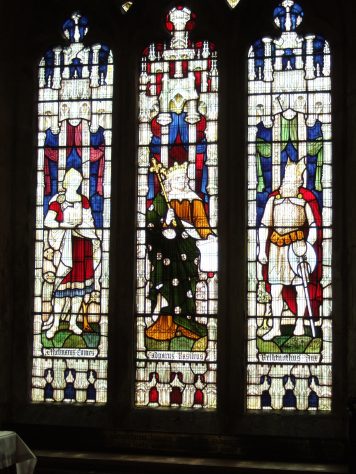 On the south east side, you will find the window with the three characters from Anglo-Saxon history, already mentioned. They are Count ?thelm?r *who founded Eynsham Abbey and gave the living of Mickleton to his new foundation as an asset; King Edgar (described as ‘Basileus’, reminding us that kings were thought to have a priestly role too); and Byrhtnoth*, the king’s designated lieutenant in Essex. He bravely resisted Danish raiding party in 991 but was cut down after agreeing that the raiders should be allowed to cross a causeway and meet the Saxons on equal terms: his sense of fair-play led to his defeat.. His thegns (knights) bravely sought to avenge his heroic death at the battle of Maldon.  You can read more about his story in the leaflet about people associated with Mickleton, at the back of church. 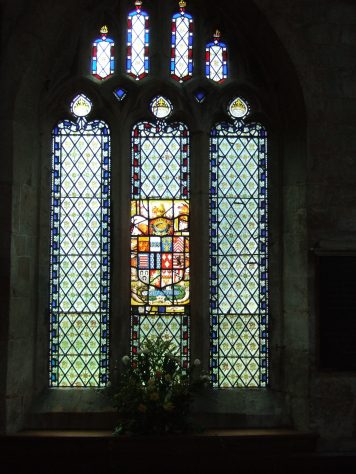 The remaining window in the Chancel has more arms and an IHS motif in the background (IHS is not ‘in His service’ as is sometimes supposed, but a Latin abbreviation for ‘Jesus’.) This window bears the interesting Latin tag: ‘Vigilet qui vincet’ – “Who watches, wins (literally,
‘conquers’)!”– which seems to echo Jesus’ words about ‘keeping watch’ and staying awake. 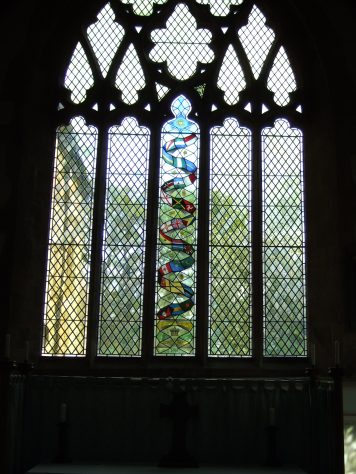 Last but certainly not least comes our new window: which celebrates the Queen’s Diamond Jubilee, but also the vision, skill and hard work of those who imagined, made and paid for it. The flags represent countries of the Commonwealth during the long reign of Her Majesty.

The emblems of the four home countries, the daffodil, thistle, rose and shamrock are included.  In the lower panel there is a quotation from the bible  “A House of Prayer for all Nations”   The crown and crosses tell us that the Queen is Defender of the Faith and Head of the Church of England.

John Conduit played a leading role in conceiving the project and getting it under way. Alison Chapman had the original design conception, artist and craftswoman Bryony Benwell realised it. The people of Mickleton paid for it. God is glorified by it. Well done to everyone!

St Lawrence’s Mickleton has benefitted over the centuries from many generous donations, often to beautify the church in particular ways. The new window is a fine example of something done to continue this work in our generation. If you feel moved to make such a gift in the future, or just to support this parish church with a cash donation or by regular giving, please contact the priest-in-charge or the churchwardens. May God bless you!

This article is taken from the booklet prepared for the Service of Dedication for the Jubilee Window, 18th May 2014

By the Rev. Fred Dawson