You are here: HomenextPlacesnextThe Belgian Soldier

People who have taken part in guided walks led by the Cotswold Voluntary Wardens will know that, although the walks are free, a collection is made at the end for the Countryside Fund, which is used to finance special projects such as the recent contribution towards the new Cotswold Way marker stone at Chipping Campden. 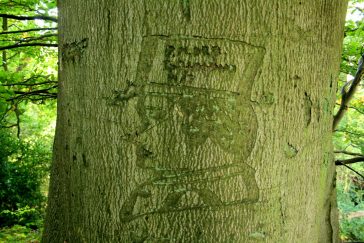 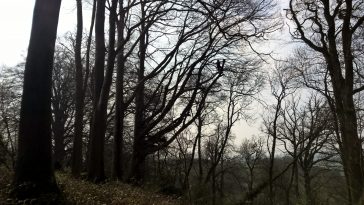 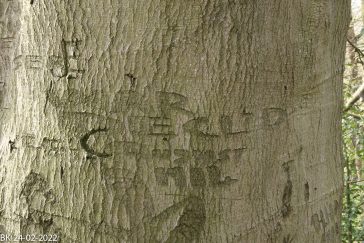 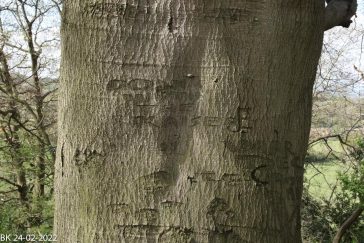 zoom
Down with the Kaiser
Tree location (approx)

The 100th anniversary of the outbreak of World War One drew attention to the tree carving of the Belgian Soldier in Baker’s Hill Wood.

Over the years, residents of Mickleton have been concerned that the tree is perilously close to the edge of the scarp and could topple down the hillside.

As a Cotswold Warden, I approached the Cotswold Conservation Board to see if anything could be done to save the tree.  Once permission had been granted, I contacted two tree surgeons at Meadowside Tree Care to get their opinion.  They suggested that two or three large branches, weighing several tons, on the scarp side of the tree could be lopped to stop it being pulled towards the edge.  Furthermore, they pointed out that, as a tree immediately in front had been felled, our tree actually wanted to grow towards the light that had been created and away from the edge.  With the permission of the land owners, Mr & Mrs Chambers of Kiftsgate Court, they came to do the work in early spring, before the new growth of leaves. *

This involved one of their employees, Toby, fixing a line so that he could pull himself right to the top of the tree and then lower himself to the branches to be lopped – quite a hair-raising sight!  The branches were then removed, chopped up and stacked neatly.

The next stage in the process was to design an information board and to get a work party from the Wardens to place it next to the tree.

This task has now been completed and the board is clearly visible from the footpath through the wood. The inscription on it reads  “During the First World War, Norton Hall, near Mickleton was opened as a hospital for wounded soldiers.  Among the patients were some Belgian men.  One of them, Victor Joseph De Martelaere, died and was buried at the Church of St Lawrence in Mickleton where his grave can still be seen.”  Another of the Belgian men, it is assumed, made his way into Baker’s Hill Wood and carved this outline of a Belgian soldier. Although the inscription on his kepi is largely indistinguishable, it looks as if there are two initials followed by his name and the date 1917.

Obviously, the tree will not last for ever, but hopefully we have managed to prolong its life, thereby preserving a piece of Mickleton’s history.