You are here: HomenextTopicsnextJubilee Mug Returns to Mickleton 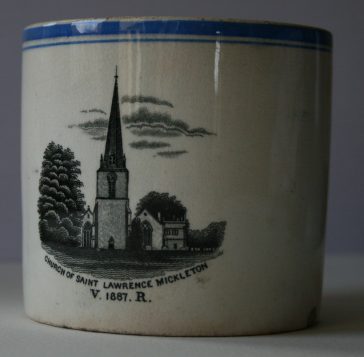 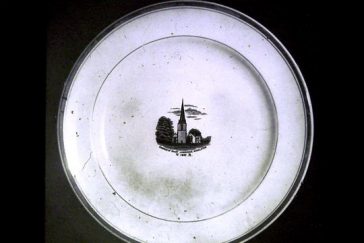 For Christmas 2013, my younger son, Ben, gave me a mug that he had bought on the ebay website. It is cheaply made of white earthenware with no manufacturer’s marks on the base and is approximately 8.5cm high and 9cm in diameter. It features an engraving of the church, shown from the west side, and written below is:

Obviously produced to commemorate Queen Victoria’s Golden Jubilee, it matches a plate that had been photographed for the Women’s Institute slide collection, now part of the Mickleton Community Archive. This photograph was in black and white but, presumably, the band around the plate’s rim was the same blue as my mug. As yet I have no more information. Were mugs given to all the village children, as has happened at later royal celebrations? Did they also receive a plate or were these given to others in the community?  In 1953 Miss Hamilton from the Manor visited all her tenants and presented each with a plate to mark the Coronation of Queen Elizabeth 11.

Victoria’s Golden Jubilee, as in all other communities across the country, was celebrated in Mickleton. I have a book containing the transcriptions of letters written by a woman called Hannah Bennett and sent from Mickleton to her brother, Charles Porter Bennett, who had emigrated to America in 1830. After his death in 1880 she continued to write to his widow, son and two daughters. In a letter dated 8th December 1887 she wrote:

I expect you saw in your papers some accounts of our Queen’s Jubilee which was celebrated in June last. There was great rejoicing in most places to show the loyalty of the people. We had several triumphant arches, and a great display of flags which made the old village look quite grand for the time and good feasting for all comers, dinner, tea and sports, dancing, etc’r. A very enjoyable day.

No mention of mugs or plates!  The book, Story of our Village 1850-1957 written and published by Mickleton Women’s Institute in 1958, gives no information about them either but does provide a little more detail about the celebrations. A committee of twelve, chaired by Mr S.G.Hamilton, was appointed at the Vestry Meeting held in March 1887 along with collectors for a local fund. By April £38.9s.6d. had been raised. There would be a Thanksgiving Service and a public dinner, in Mr Hemming’s orchard, at 1.30pm. The Vestry Minutes, apparently, also mention a Sports Committee and a band.

I wonder how many mugs and plates survive. Are there still some in Mickleton?