You are here: HomenextTopicsnextMarket Gardening in Mickleton

Loss of an old way of life 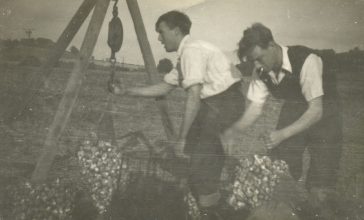 Market gardening was an important industry in Mickleton, surrounded by the fertile soils of the Vale of Evesham. One of Mickleton’s older residents, John Smith remembers working for Webb’s, one of the main employers in the area.

Webb’s market gardening holding was started in 1896 in Mickleton by Joseph Webb and continued into the 1980 by his great grandson J Robbins. Mickleton had good ground for growing tomatoes.

Fifty acres of ground were cultivated with 12 acres used for greenhouses. However, by the time of the BBC’s Domesday Project in 1986, 6 acres of greenhouses were disused. They stopped growing sprouts in 1976 because of a lack of labour. In 1986 ten people were employed full-time, 6 people part-time and up to ten people in casual labour. The crops were sent to supermarkets all over the country. Plant pests and diseases were controlled by spraying both inside the greenhouses and out in the open. Nitrogen, potash and phosphates were the fertilisers which were used. All the workers were employed at the same level.

The deepening crisis in the market garden sector pushed the labourers to find new jobs in Birmingham and Coventry. Most of the former orchards turned into new developments, which in turn attracted retirees and commuters.

Add a comment or more information about market gardening in Mickleton