You are here: HomenextPeoplenextJust an old piece of wood

Just an old piece of wood

Information on the Leach, Lissaman and Grinnall families in Mickleton.

At the beginning of September 2013 Mickleton Community Archive’s project leader, Barry Metcalfe, was contacted by a Mr Peter Renfrew who had a wooden panel measuring approx. 18” x 8” that had been stored in his garage since the 1930s. On the panel, written in pencil, was the following: ‘ Made by C.E.Leech Mickleton November 14th 1908’. 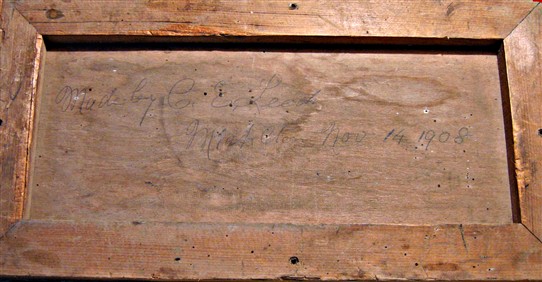 Charles Edward Leech (the surname is sometimes spelt Leach) was born in Cheltenham at the beginning of 1861, the third child of Henry Leech and Selina Maria Dark/Darke and he was 3 months old when the census was taken on 7th April. The family was living at the Exmouth Arms Inn, Bath Road, Cheltenham where his father was the publican and must have been reasonably well off as they employed two servants. Later that year Charles’ older brother, nine year old Henry William, died, followed shortly after by the death of his father at the early age of 36.

About 18 months later, in 1863, Charles’ mother married a William Salisbury.  The census taken in 1871 recorded the family living at Chequers, in the Washwell area of Painswick, Glos. William Salisbury, aged 59, was described as a builder.  He and Selina had had two children , Joseph and Alfred, and they along with William and Charles from her first marriage, were at school. Ten years later the 1881 census listed Charles as still living with his mother, stepfather and stepbrothers but by then family had moved to 5, Vauxhall Road, Gloucester.  Charles was described as a carpenter, a trade he had probably learnt from his stepfather whose occupation was given as carpenter and joiner.  He was still living with his parents when the census was taken in 1891.  William Salisbury died in 1893.

Connection with the Grinnall family

It must have been around this time that Charles moved to Mickleton as towards the end of 1893 he married a Mickleton girl called Agnes Grinnall.  She was the daughter of Emmanuel Grinnall and Susan Harris and the 1891 census for Mickleton showed that the family was living at the Lamb Inn [now Lamb House, Lawson Square]. Emmanuel was recorded as publican and carpenter and of their four children only Agnes, then aged 19, and her 21 year old brother Henry, also a carpenter, were the only ones still living at home.

The reason for Charles’ move from Gloucester is unknown but it is likely that he moved to find work and that he may have responded to an advertisement placed in the Gloucester Citizen by Mickleton builder, William Lissaman. He was certainly placing adverts for workers in that newspaper at around this time. For example, he was seeking a plumber, painter and paperhanger [one man!] in 1892 and a sawyer, at 6d and hour, in 1893.

William Line Lissaman was the eldest child of William Lissaman and Elizabeth Line.  He was born in Milverton, Warks in 1856 and grew up there.  His father was a carpenter and by the time that the 1881 census was taken had built up a small business employing three men and five boys one of whom was 24 year old William Jnr. At some point during the next ten years William Jnr set up his own business and moved to Mickleton.

The 1891 census records him as an architect, surveyor and builder and living at Alveston House on the High Street along with his younger brother Ernest, a builder and contractor. Both are described as employers. Also listed in the household are Ernest’s wife Emily and their six year old daughter, Edith. They employed a local girl, 15 year old Edith Batchelor, as a general servant.   At this time William was engaged in completing the building of Kiftsgate Court begun in about 1887 by Sidney Graves Hamilton, then Lord of the Manor. The plans for the house, which included the removal of the portico and library wing of the Manor House, transportation of the materials up Glyde Hill on a specially built light railway and rebuilding on the new site, were drawn up by C.Martin Tombs of Chipping Campden who carried out the work until his death in 1890.  William Lissaman then took over.  According to research by members of Mickleton Women’s Institute in the 1950s, he had “a ‘steam joinery and moulding mills’ on the High Street”.  [This was probably on land behind Alveston House. It is thought that he carried out extensive alterations to the house which appears to have formerly been a small farmhouse with land or orchard around it.]

William married Margaret Wallace Taylor on 28th September 1892 in the Congregational Church in Stratford upon Avon. Over the next few years they had three children; Katherine May born in 1895, William Ewart in 1896 and John Alexander in 1899.

The Leech and Lissaman connection

Job adverts in the Gloucester Citizen

It is likely that at this time Charles Leech was working for William Lissaman but any business success was not to last long as William got into debt and on 4th June 1897 he was declared bankrupt and a receiving order was issued.  However, he must have quickly bounced back as on 1st October 1898 he was again advertising for staff in the Gloucester Citizen.

When the census was taken in 1901 the Lissaman family was still living in Mickleton. Williams was described as a joinery manufacturer and employer.  George Leech and his wife, Agnes, were also still living in the village and, as he was described as a joiner and worker, it is likely that he was employed by Lissaman. Agnes’s brother Henry may have been working for him too.  Charles wrote his name on the piece of wood that started this story in 1908.  When the next census was taken in 1911 William Lissaman described himself as a builder and joinery manufacturer and gave his address as Alveston Villa. He was then 54 years old, his wife was 42 and all three children, aged 16, 14 and 12 were still living at home.  Charles Leach was 47 years old, still a joiner but both he and Henry Grinnall had become self employed.  No precise address was given for either but from the census listing it seems they must both have lived in the area of the village where the butcher’s shop and Stoneleigh are. One villager has said that the workshop [opposite Ivy House and now belonging to Stoneleigh] was used by the Grinnall family who at one time made ladders there.

Little else is known at present although research is ongoing. William Lissaman may have moved to Broadway. It is known that William Line Lissaman died at Stow in 1944 aged 87 and his wife in Oswestry District in 1952 aged 82. Charles Leach died in 1921 aged 58.  His wife, Agnes nee Grinnall, died the following year aged 51.  Although they had had no children there are still Grinnalls living in Mickleton today.